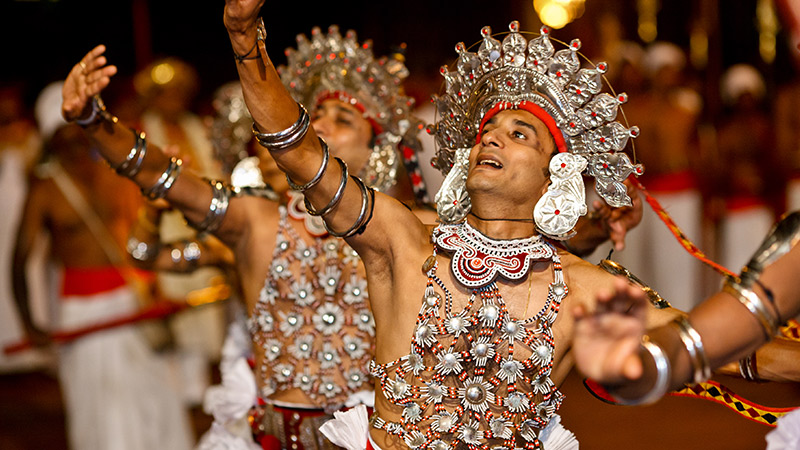 To those looking for some entertainment with the right amount of culture in Kandy, dropping by one of the many Kandyan dance and drum shows is a must! With a range of mind-blowing dance moves and stunts originating from across the island, this is a very defining experience for those visiting the city. The routines are mostly aimed to entertain the audience, with the performances lasting almost an hour.

What’s exciting about this?

Intricate dance moves and elaborate costumes are enough to grab the audiences’ attention for hours. Up-country dances, also known as udarata naturm, have techniques which are known to have derived partly from South India and ancient indigenous dance rituals. The classical dance tradition has been a part of the island for centuries and is a major part of many cultural and religious events, particularly during the Kandy Esala Perahera. Only in 1916 were Kandyan dances made a part of the annual Kandy Esala Perahera. The roots of this dance is said to lie in an ancient village ritual known as the kohomba kankariya, which is known to have combined music and dance. In terms of the Indian influence on the dance form, this is said to have come mainly from Kerala in the 18th century when the dancers and musicians were invited to perform by the King of Kandy.

Who can enjoy this?

Kandyan dance is a fascinating branch of dancing that is rarely seen in any other part of the world. This is a fun learning opportunity for your kids, but the shows start late and it can get a little loud. None of the mentioned venues has air-condition, so it can get warm!

Why add this to your itinerary?

When you opt to witness this ancient form of art, you’re choosing to be a part of a tradition that is centuries old. Not only do you learn about the dancing technique, but the costumes and stunts also carry with them great significance. The best part about the Kandy dance and drum shows is that all the venues are within the city limits, which is quite convenient for those interested!

Where can you find this?

The three venues to watch the performances are: If you’re looking to evade the crowds, YMBA is a comparatively low profile venue with thinner crowds. Arrive as early as possible if you choose the Kandyan Art Association & Cultural Centre as this spot sees large crowds, attracting most tour groups during the season. Kandy Lake Club is known for the costumes of the performers along with a ‘fire walking’ finish to remember.