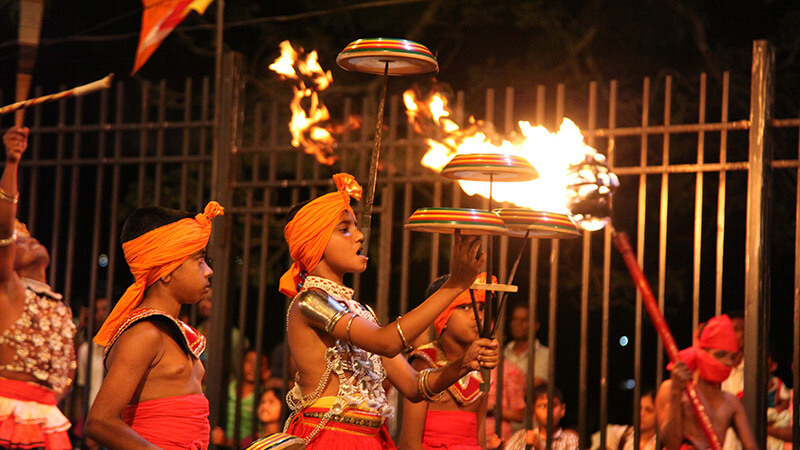 As the capital of the central province in Sri Lanka, Kandy is an important stop a lot of tourists choose to make. Located amidst the charming green hills of central province and partially encircled by the Mahaweli River, learn all about this city teeming with cultural heritage.

Kandy is the central point from where you’ll be able to reach the other parts of Sri Lanka with great cultural significance. This put together is called the cultural triangle. The Kingdom of Kandy once flourished under a number of rulers in Ceylon. It was the place that attracted many invaders but was impenetrable.

Kandy was selected as a suitable location to establish a kingdom mainly because of its natural defences and extraordinary beauty. The mountains that surround the city are rich evergreens. There are many species that grow on the hills. The lush vegetation here has drawn even rare species of birds to reside in this environment. Not just the birds, but monkeys too are common in Kandy. Therefore, it’s best you hang onto your valuables while you walk through the streets as you just might encounter these mischievous creatures of the forest.

As you stroll downtown, you see lanes shops that are neatly arranged. Eateries and little cafes too will be among them.

Here’s the ultimate guide to discovering Kandy. Soon enough, you’ll come across a large building that looks almost abandoned. The feeling that you’ve stepped back into colonial-era will definitely be hard to get rid of. Some of the old signposts are left hanging as they were back in the day as well. This is indeed the ideal place for a creative photograph perhaps.

The locals in the area are as pleasant as ever. There’s a cheery, yet calm ring to the atmosphere in Kandy. You’ll come to realise this as you cycle by the Kandy Lake by evening. The cool breeze will leave you refreshed as the temple lights begin to come on. The little town comes to life in a whole different manner by sunset, under the sky which turns into shades of pink and orange.

Kandy is quite a mellow city and because of this, there is not much activity during the sundown hours. In fact, the streets are nearly empty by about 7:30 pm. Even as the night sets in, the brightest monument among them all would be the large Buddha statue, glowing from a distance in the mountains. The little specs of twinkling lights in the mountains give Kandy an almost mystique look. Come…be enthralled by the magic of Kandy city.

Learn all about Kandy, located roughly 122 kilometres from the commercial capital of the city of Colombo.
View More

Maximize your time spent in Kandy with these insightful travel tips.
View More

Find out the best time to visit the capital of the central province.
View More

The historic city of Kandy carries with it a rich past. Kandy got its name from the Sinhala term “kanda”, which translates to ‘mountain’, due to its geographical location.